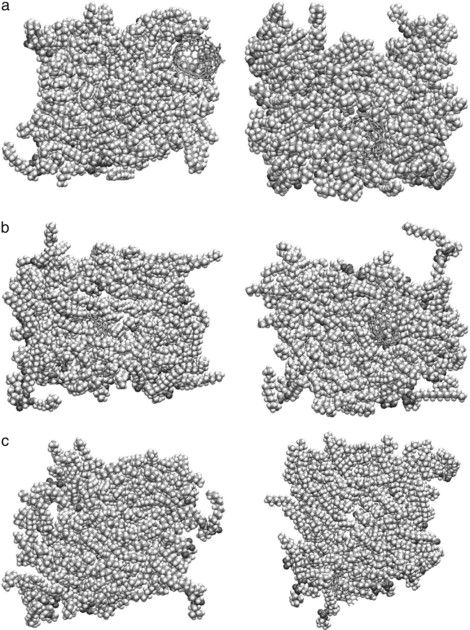 This article reports an all-atom molecular dynamics simulation to study a model pulmonary surfactant film interacting with a carbonaceous nanoparticle. The pulmonary surfactant is modeled as a dipalmitoylphosphatidylcholine monolayer with a peptide consisting of the first 25 residues from surfactant protein B. The nanoparticle model with a chemical formula C188H53 was generated using a computational code for combustion conditions. The nanoparticle has a carbon cage structure reminiscent of the buckyballs with open ends. A series of molecular-scale structural and dynamical properties of the surfactant film in the absence and presence of nanoparticle are analyzed, including radial distribution functions, mean-square displacements of lipids and nanoparticle, chain tilt angle, and the surfactant protein B peptide helix tilt angle. The results show that the nanoparticle affects the structure and packing of the lipids and peptide in the film, and it appears that the nanoparticle and peptide repel each other. The ability of the nanoparticle to translocate the surfactant film is one of the most important predictions of this study. The potential of mean force for dragging the particle through the film provides such information. The reported potential of mean force suggests that the nanoparticle can easily penetrate the monolayer but further translocation to the water phase is energetically prohibitive. The implication is that nanoparticles can interact with the lung surfactant, as supported by recent experimental data by Bakshi et al.